On 30th March we said goodbye to the winter members with a final roll up and lunch.  We thank Les for all his organising, the ladies who served the lunch and Chris for taking the photos.  we hope to see you all next winter and hope you have a good summer season.

On a very windy day an enjoyable and sociable contest took place between a men's team from Pirrie Park and a mixed Totton team.  we won 6 rinks out of 7 scoring 162 to 72.  The highest scoring Rink was Rink 1 Rosemary, David B and Mike G with a score of 31 - 11.

Tea was served after the match and we thank Linda T for her hard work in the Kitchen assisted by Mandy, Gill and Kev.  Thanks too to captain of the day Graham L.

On Thursday 24th March we welcomed 18 members of Sherfield English to the club for the first time and we were able to play 18 ends in perfect weather.  Everyone was very friendly and it was an enjoyable afternoon.  Our winning rink was rink 6 Carol Mc, Dave B and Neil H who scored 36 to 1.  Overall we won 5 and drew 1 rink.  The score favoured us 145 - 63.  We look forward to our return match on grass when no doubt the scores will be reversed!

The final league table is on the notice board.  I hope everyone enjoyed it, and looking forward to winter members playing again next year

On Saturday 26th March 2 members of the club, Shani and Guy joined Bumble, 3Honeypot staff and volunteers at Totton AFC and collected £120 for the charity.  They shook buckets before and after the match.  We thank Lin for arranging this opportunity to add to the club’s charity donation.

On Friday 4th March members gathered at lunchtime to say goodbye and give good wishes to Mary on her retirement.  She has been a cheerful and helpful member of the Office over recent years and the club will miss her.  She was presented with various gifts and an inscribed vase.  She cut a celebration cake and then a buffet lunch was shared.

WE ARE PLEASED TO ANNOUNCE THAT OVER £900WAS RAISED

THANK TO ALLWHO CONTRIBUTED TO, HELPED AT AND ATTENDED THIS EVENT

24 bowlers had the experience of playing bowls with a difference over 3 games.  Playing in teams of 3 they played triples with 5 ways of scoring - normally, with the jack sent up at the end of the end, with their non dominant hand, woods within a yard of the jack and the first 3 woods scoring points.  After this a target was set out and everyone tried for 3 goes to hit the target using just 1 wood.  this last proved difficult and by scoring 25 and 10 respectively, these scores gave Mark and Margaret the overall victory as best man and lady.  Chris N and Lin were awarded the lowest score prizes.  Our thanks are due to Joyce for planning the day and supplying various items for play and to Rosemary for running the games.  After play everyone joined the spectators and helpers for butties and cake, followed by a raffle.  President Steven presented flowers to Barbara and Brenda for their hard work with the catering and to Jill for administration and running the raffle.  The profit of over £160 will be split between the club charity and club funds

This was a well attended event with 36 players in 12 teams and 10 more helpers and spectators.  The mornings 3 rounds were won by Teams 2 & 6 who contested a 7 end final in the afternoon.  Team 3 - Steven. Margaret & Rosemary won, the runners up from Team 6 were Gwen, David N & Sheila. Gwen presented the shield to the winners.  The lunch was enjoyed by all present. Barbara and her helpers were thanked for all their hard work. Jill and Guy ran the competition and Jill also ran the raffle.

The league concluded on 11th August and was won by Jenny, Marjorie & Mike W, the runners up were Bill K, Liz and Dave M. the platers are grateful to Colin who ran the sessions and organised the league.

10 pairs took part in this competition on 16th July.  3 games were played in the morning and the players enjoyed coffee and later a Ploughman'a Lunch.  This was prepared by Barbara and her helpers.  Jill ran the competition and the raffle.  The play off between Guy and Joyce and Gill and Keith took place after lunch and was won by Joyce and Guy.

Ruby Day was an enjoyable occasion.  12 ladies played and there were 3 spectators and 4 helpers.  Carol and Jackie tied on 5 points and Carol won the shield on points difference.  Sheila O won the spider.  Thanks to Jill for organising the day and Barbara for organising the catering(recovering well after Morrison’s let her down with a non delivery of sandwiches).  The Big Blue Café made fresh well filled sandwiches at one hour’s notice.  Nina served the teas and coffees and we are grateful to her for this.  The raffle had many prizes and together with the Spider fees made £80 for the Club Charity.

On a glorious sunny morning 5 rinks contested  the competition.  The President's Team triumphed by 4 rinks to 1.  Rink 1 was the overall winning rink.  It was good to see spectators able to join us.  The event ended over butties and drinks in the club room, and the time to sit together and chat was enjoyed by everyone.

President Steven presenting retiring Club Secretary Jan with an engraved vase.  This was to mark many years of service to the Club as Secretary and also her work with the Ladies section and with catering for many events.

On Saturday 29th May we were delighted to welcome 16 people to try out bowls.  They were assisted by 13 club members and the office receptionist and a good time was had by all in lovely weather, we hope they will return and join  us in the future, 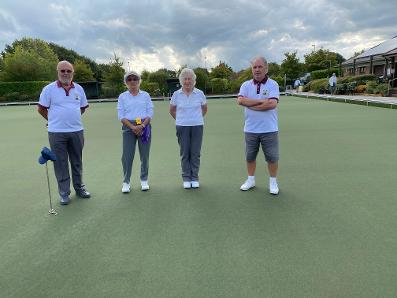 This was contested by11 ladies and 13 men.  At the end of the morning's play the 2 highest scoring pairs were Lynda and Mike H and Carol and Mark.  They played off after lunch and Lynda and Mike were the winners.  An excellent sit down lunch was enjoyed, followed by the raffle.  This raised £76.50 for this year's President's Charity.  Many generous prizes were donated for the raffle.  Barbara and Jill planned, purchased and served the food and we thank them for this.  We are also grateful to Mandy is assisting us to set up in a Covid safe way.  Mandy was presented with a bouquet as an expression of thanks for all her help. 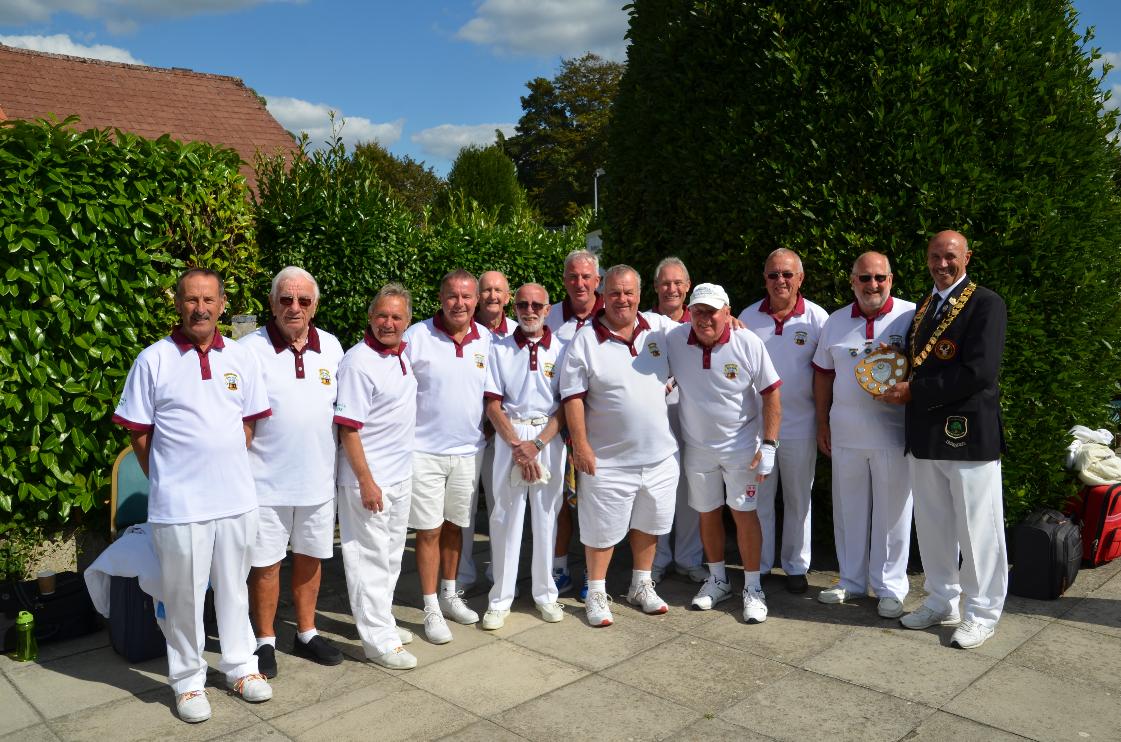 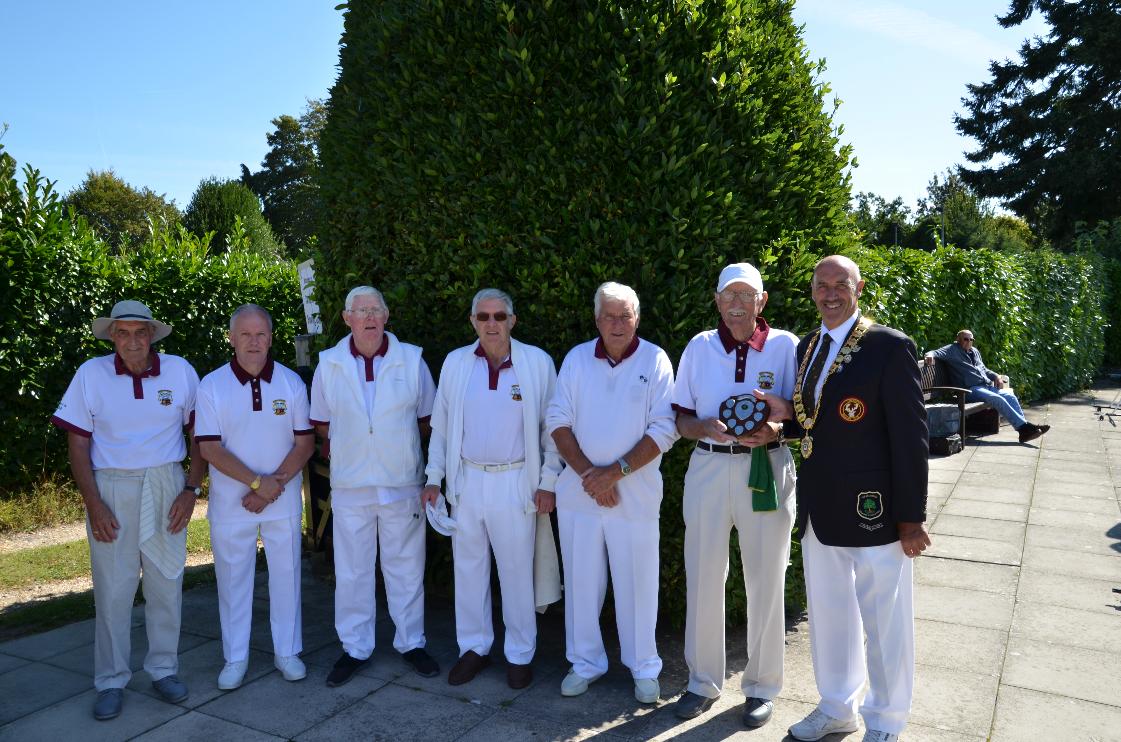 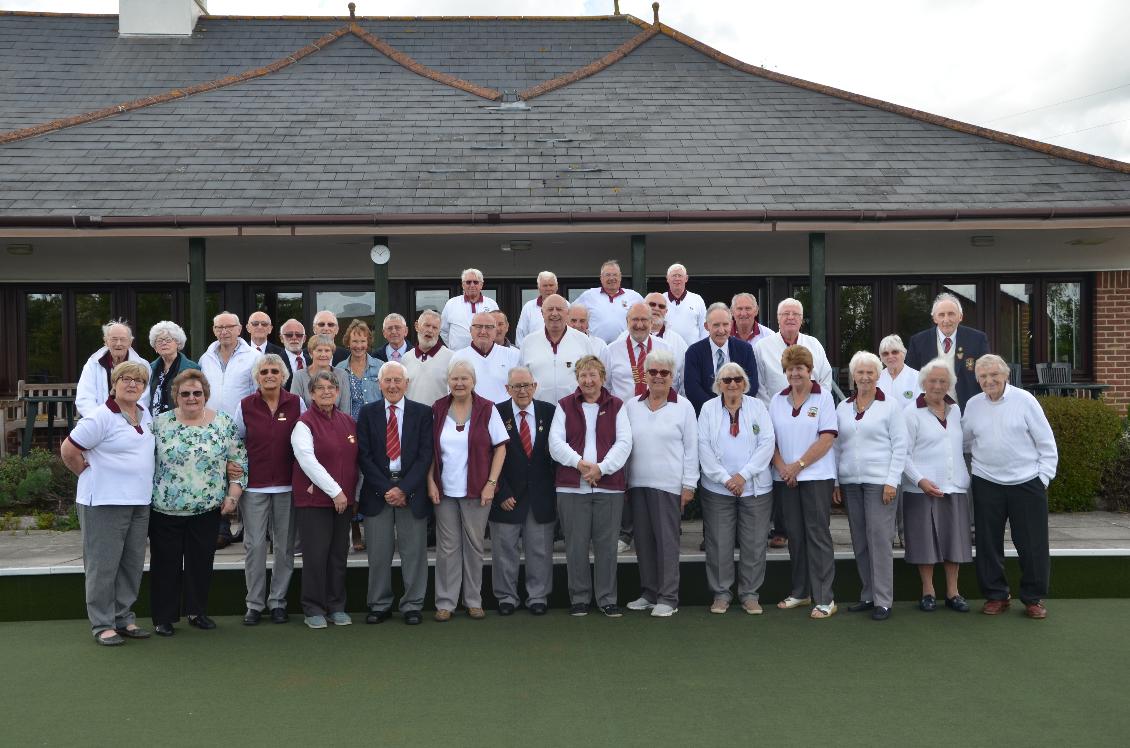 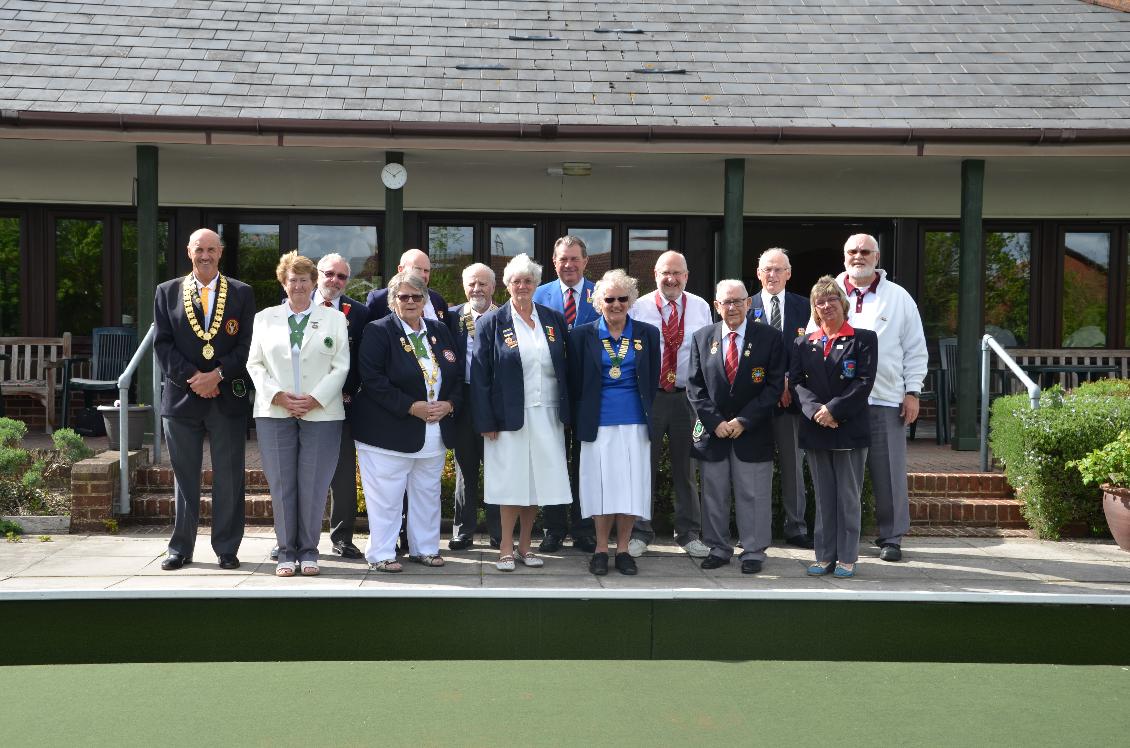 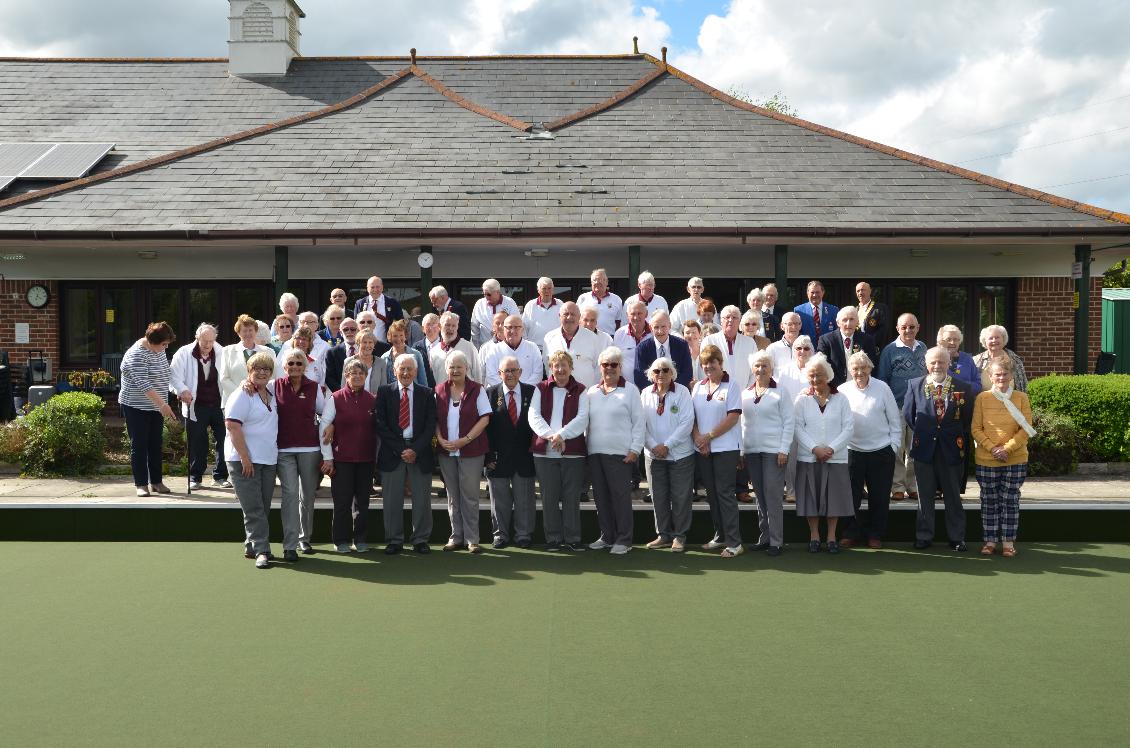 The celebrations started with over 50 guests welcomed by the Club president Steven Brice.  The guests included founder members, past club officials, representatives of local bowling associations and local councillors.  A 2 course lunch was served followed by speeches from the Club President, Derek Biggs(Town Clerk of Totton& Eling Town Council) and Paul Robson (Junior Vice President Bowls England).  Derek told us of the history of the Bowls Centre and the Council's contribution to its development and continuing support.  Paul reminded us that a predecessor had opened to centre and wished us well in the future as he proposed a toast to the club.

Once lunch was over many current members of the club arrived at 2.00pm and there followed an hour of bowling, which saw all the rinks in use.  Although cold and windy a good time was had by all.

At 3.30pm the bowlers then joined the spectators for tea which was served to a packed club room.  The President then cut a celebration cake, made by Keith Sinclair and iced by his daughter.  The Raffle raised over £250 for the President's Charity (Motor Neurone Disease).  This ended a busy and enjoyable day. 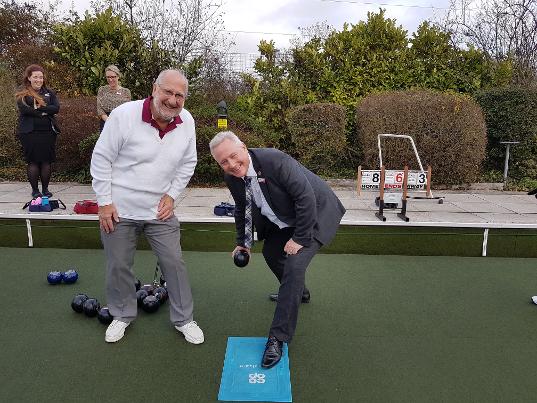 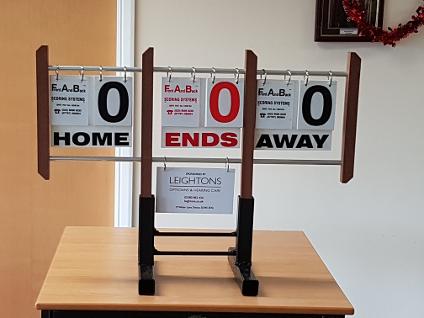 On the 8th December 2018 Lee Janes, Laura Crompton and Meryl Chambers  from Leighton's Opticians came to the club to present the new scoreboards they had kindly sponsored  They are now inuse and have set our 20th anniversary year off to a good start.